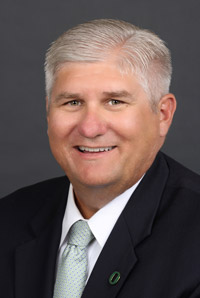 Dr. Roger J. Thompson is in his thirteenth year at the University of Oregon where he serves as the Vice President for Student Services and Enrollment Management. He is responsible for services that contribute to enhancing the student experience, recruitment, retention, and graduation. His portfolio also includes providing continuing and professional education for the community.

Thompson leads an organization of more than 1,900 team members and an operating and scholarship budget in excess of $200 million. Further, enrollment at the University of Oregon has reached record levels for total enrollment; academic quality; diversity, including ethnicity, socio-economic, and international representation; and freshmen-to-sophomore retention rates during Thompson's tenure. In three of the last four years, the University of Oregon has set record enrollment for the largest, most diverse, and most academically prepared freshman class in the history of the institution. The 2019, 2021, and 2022 incoming classes all established new records in the aforementioned areas. The class of 2022 set a record for the largest class ever with 30% growth from the 2010–2019 10-year average, and representing 35% growth since 2020, while diversity and academic quality also established university records..

Additionally, capital construction and improvement has occurred throughout the division beginning with the new Kalapuya Illihi residence hall opening in fall 2017, a significant expansion and renovation of the University Health Center in 2019, and the “UO Transformational Housing Plan” supported by the University of Oregon Board of Trustees in May 2018 completing phase one with the opening of DeNorval Unthank Hall in 2021. Phase two and three of the plan will be completed in 2023.

Prior to arriving at the University of Oregon, Thompson served as the vice provost for enrollment management and special advisor to the president at Indiana University in Bloomington. During his four-year tenure at IU, the university not only reached record enrollment—growing from approximately 38,000 students to more than 42,000 students—but the quality of the freshman class grew to the highest level in its history, including a 100-point rise in average SAT scores, from 1103 to 1203. Additionally, new financial aid programs were developed and implemented to help low- and middle-income families with the cost of attending college, and the university undertook a new approach to merit-based scholarships. The signature institutional aid program, 21st-Century Scholars, was recognized by the College Board as a model for effectiveness in addressing college affordability.

Prior to his time at IU, Thompson served at the University of Alabama for more than eight years in a number of roles in enrollment management, eventually becoming chief enrollment management officer as associate vice president for enrollment management. In every year he was responsible for enrollment, the institution set records for total enrollment, entering freshman class size, academic quality, and diversity, including a growth in African American enrollment of nearly 50 percent. Thompson was also recognized for his contribution to the university by receiving the Robert Vance Award, named in recognition of the leadership provided by federal judge Vance, who was instrumental in enforcing desegregation in the South in the 1960s. While in his position as a faculty member of the UA Graduate School, Thompson served on several doctoral dissertation committees in the higher education program. He was also awarded lifetime membership to the UA National Alumni Association. Thompson also served in a number of capacities at the University of Southern California for nearly eight years, and prior to his tenure at USC, worked in student affairs at several other institutions.

A nationally distinguished expert in strategic enrollment management and student services, Thompson's work has been recognized by several organizations including PBS News Hour, the New York Times, the Washington Post, the Los Angeles Times, The Atlantic, the College Board, ACT, and the American Marketing Association. Thompson has been a frequent presenter at national and regional conferences throughout the country and has published in the areas of leadership development, college choice, student persistence, student success, and affordability issues in higher education. He also served for nearly a decade on the editorial board for the higher education journal College and University and currently is a member of the advisory board for the national publication Enrollment Management Report.

He founded an AAU group of chief enrollment management officers, which he chaired for eight years. Dr. Thompson also serves as Vice Chairman of the Marist Catholic High School Board of Directors, and since 2015 Thompson has served on the statewide Board of Directors for Special Olympics Oregon. In 2016, Thompson was knighted as a Portland Royal Rosarian, an honor for those in Portland affiliated with the Portland Rose Festival parade and celebration.